Morocco has opened its doors to sub-Saharan migrants in recent years, especially after its return to the African Union in 2017. The ministries concerned and associations have rushed to create a favourable climate for their reception, training and integration.

Civil society and the training of the continent’s workforce

The experience conducted by the Jiber association is considered one of the most interesting in terms of training migrants settled in Morocco. For this, seven years ago, the association signed a partnership with the Ministry of 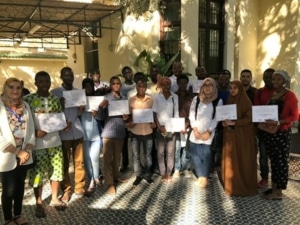 At the presentation of language certificates to African migrants Source: facebook.com/jiber.ma

According to the president of the Jiber association, Mustapha TOUDI, the launch of the vocational training programme for migrants in Morocco dates back to 2015, and since then, the association has continued to receive migrants who wish to benefit from training in agriculture, so that they can subsequently be integrated into agricultural farms in the Fes-Meknes region. In parallel to this, the association also launched, in 2018, an English language training course, in partnership with the American cultural centre in Fes.

In Tangiers, the association Rencontre Méditerranéenne pour l’Immigration et le Développement (ARMID), has developed a comprehensive programme to improve the situation of immigrants from sub-Saharan Africa, by providing them with solid professional training that leads to the distribution of certificates.

Between 2019 and 2022, the association launched a training programme in the field of hairdressing and aesthetics for 100 immigrants from sub-Saharan Africa. Indeed, it was the previous project of the association, during the period between 2012 and 2015, the recycling of all types of recyclable household waste such as paper, plastic and metals, as the project has experienced an unprecedented influx of immigrants, according to Mr. Said Bouamama, president, of the Association Rencontre Méditerranéenne pour l’Immigration et le Développement, who confirmed the participation of 200 immigrants

As for the idea of the project of socio-professional integration of sub-Saharan migrant women, “it emerged through a number of painful testimonies that these sub-Saharan migrant women shared with the association, which reflect their suffering in daily life, notably, poverty, fragility and social exclusion, as well as exploitation due to the domination of men, pushing immigrant women towards the abyss of the prostitution and begging market. As the president of the ARMID association confided to us, the latter is encouraged to continue this experience, on the basis of the observation that it has made, attesting to the creativity of sub-Saharan women, especially in aesthetics and hairdressing, a profession in high demand in a city like Tangier, where women are trying out new African hairstyles such as the “rasta”.

Saïd Bouamama also does not hide his great ambition to integrate more young African immigrants as well as Moroccans into the framework of the project for the restoration of historical buildings, through the establishment of a school specialised in the rehabilitation of spaces in Tangier 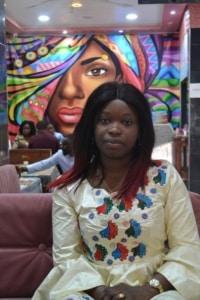 In Rabat, Amy Sy DIALLO, has opened her own restaurant, offering African and Senegalese dishes. Amy Sy came to Morocco as a scholarship holder to study law, within the framework of a partnership between the two Moroccan and Senegalese ministries of higher education.

Amy Sy is currently benefiting from an internship in catering, provided by the National Agency for the Promotion of Employment and Skills (ANAPEC)

Amy Sy DIALLO, declares: ”My mother previously settled in Morocco, a reason that encouraged me to come here. I discovered that there are many opportunities for work here. I have already worked in call centres. I noticed that some of my colleagues had a lot of difficulties integrating, Moroccan cuisine is different from ours, which is what pushed me to open an African restaurant.

The Tangier community and sub-Saharan migrants

Morocco has become an attractive area for north-south migration, due to the polarising force of its economic and social model, as an emerging power, because it is no longer just a country of transit, but has become a country of reception and integration of a large number of migrants, whether they are sub-Saharan or asylum seekers.

The city of Tangier in particular is considered an attractive area, due to the stability factors it presents for immigrants from both directions, and although most immigrants from the north to Morocco are generally legally settled, it is difficult to count the migration flows from the south, although it is evident and widely observed in various parts of the city. In this context, the city of Tangier, like all Moroccan cities experiencing this phenomenon, was involved in the first exceptional campaign launched by Morocco in 2014, which resulted in the settlement of 23,096 cases, which at the time represented 83% of the total applications submitted, as well as in the second campaign launched after In 2017, more than 20,000 similar cases were settled.

The community of Tangier has adopted from the beginning an approach to strengthen its image as an institution of support and guidance for immigrants, as the community of Tangier was the first to develop a city charter in 2014, approved by its collective council unanimously by its members present. Its preamble states that the city of Tangier has a history, as well as an ancient Arab, Islamic, Amazigh, African and Mediterranean dimension, and its provisions state that the city of Tangier is committed to ensuring the safety, security and well-being of the city’s residents, visitors and immigrants. And to renounce all forms of discrimination, racism and hatred, and adhere to the principles of equity, equality and respect for human rights.  Within this framework, the community has participated in numerous national and international meetings to discuss migration policies and establish new mechanisms to better manage this phenomenon.

Since 2017, Tangier has contributed to the work of the “Migration between Mediterranean Cities” programme in its various conferences and seminars, which focused on employment and education (Madrid) – human rights and access to basic services (Tangier) – refugees and local government issues (Vienna) – housing Social and urban planning (Amman) – social and educational integration of immigrants (Turin) – interurban migration (Beirut) – cooperation between local institutions (Lyon), and the implementation of the “Tangier Welcomes” project in cooperation with the Organisation of Mediterranean Cities. ..

The Collectivity of Tangier, working in cooperation with the Organisation of Mediterranean Cities, to face the constraints of this phenomenon, to engage in the provision of reception structures and an administrative organisation oriented towards the accompaniment of migrants, taking into account the particular situation of the city, and in accordance with the governmental efforts made in this field. The authority respects the limits of its legal competencies while remaining open to all interesting initiatives in this regard, especially those submitted by local civil society associations dealing with migration and asylum issues, while the authority is working on the implementation of programmes aimed at strengthening the capacities of civil society organisations in this field and equipping them with a set of working mechanisms and tools.

The city of Tangier has several civil society associations dealing with migration and asylum issues, and the city council seeks to support and open up to them on a permanent basis, and to provide them with the possible and available capacities within its competencies, in order for the community to participate in the process of institutionalising cooperation and coordination between international non-governmental organisations and civil society associations, with the aim of raising public awareness of the migration issue and the constraints that migrants face in society and seeking to enshrine a culture of coexistence. In this context, the city of Tangier has hosted numerous seminars, workshops and meetings, the last of which is the “Tangier Receives” project for the year 2021, a project that provided courses in Moroccan dialect for the benefit of sub-Saharan immigrants, to enable them to communicate as well as vocational guidance and local culture for integration, which was sponsored by the “Mediterranean Authority for Migration and Asylum”, the “Solidarity Association” and the “Mediterranean Encounter for Migration and Development”. 19 “have negatively affected this project. From the idea of creating a permanent reception centre for listening, orientation and accompaniment, a mobile centre was set up, which worked to establish contact with a group of immigrants, maintain them and include them in a census register, a project that can be developed and sustained after the “Covid-19” pandemic.

The community also participated in the project “Structuring and strengthening the dialogue between the Community and its civil society for a joint action for the integration of migrants” which was carried out in partnership between the Union of Cities and Local and Regional Governments – Municipality of Madrid – Municipality of Lisbon – Community of Tangier – Moroccan Network of Multicultural Cities and others. The Council is also looking into the possibility of providing reception and monitoring centres for the flow of migrants in the city, thinking about the creation of an immigration observatory and an immigration council that deals with all immigration issues in general.